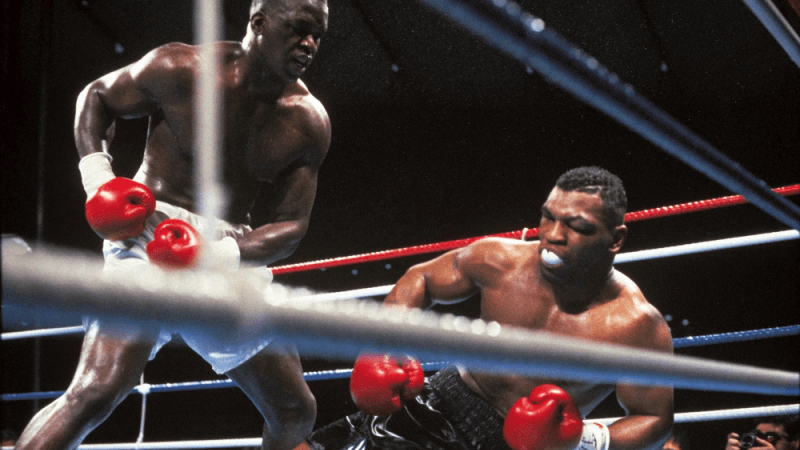 In what has largely become regarded as the biggest upset in boxing history, James 'Buster' Douglas shattered the mystic of 'Iron' Mike Tyson at The Tokyo Dome, Tokyo, Japan in front of an estimated crowd of 40,000. Douglas was ranked No. 2 by the IBF, No. 3 by the WBC and No. 4 by the WBA and a 42-1 underdog.

Rumours were flying around before the fight that Tyson was not as committed to training as he usually was. Greg Page, the former WBA champion had floored Tyson in sparring and other sparring sessions had not seen Tyson looking at his best.

Douglas had sadly lost his mother to a stroke 23 days before the fight and Douglas had become a far more driven individual in his training camp according to J.D. McCauley, Douglas' trainer and uncle.

Mike Tyson losing wasn't in anyone's mind other than Douglas himself and his team. Tyson, the youngest ever heavyweight world champion was seen as invincible up to this point in his career, frankly, no-one had truly come close to beating him as a professional, so, when Douglas controlled Tyson behind a hurtful and fast jab round after round, the boxing world couldn't believe what it was seeing.

Just when all seemed lost, Tyson found the punches to score a heavy knockdown in the dying seconds of the eighth round. Douglas got to his feet at the count of nine, just as the bell rang to end the round.

In the ninth, the challenger managed to clear the cobwebs from his head and regain control with the stinging jab and followup right hands that had served him so well throughout, and in the tenth he did what no-one watching could believe, he floored Tyson with a combination that finished with a hard left hook. As Tyson picked up his dislodged gumshield and put it in his mouth the wrong way round while on all fours, referee Octavio Meyran's count reached six, Tyson then tried to get up, but as Meyran reached the count of ten the battered soon to be ex-champion fell into his arms.

Douglas failed to find that form ever again while Tyson came back to cement his place as one of the all-time great heavyweights in boxing's rich history, but, James 'Buster' Douglas will always be remembered for this fight. He truly shocked the world.