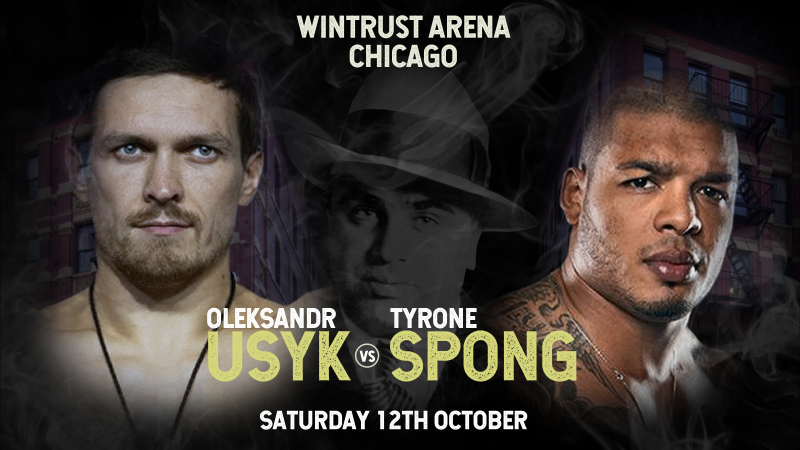 Former undisputed cruiserweight champion Oleksandr Usyk makes his heavyweight debut on October 12th at the Wintrust Arena in Chicago, Illinois after a shoulder injury prevented him from doing so earlier in the year against former world title challenger Carlos Takam. The French/Cameroon Takam has since signed with Star Boxing so Matchroom was forced to find a new opponent for the Ukrainian.

There are those that are not convinced that Usyk will have success as a heavyweight but I disagree. Usyk's style is similar to that of his fellow countryman and close friend Vasiliy Lomachenko, who can apply pressure using speed and unusual angles and fight on the retreat and still land hurtful punches. In other words, Usyk will bring something we are not used to seeing at heavyweight and It should be interesting to watch.

These days heavyweights are so big compared to yesteryear when Muhammad Ali, Larry Holmes, and Evander Holyfield glided effortlessly around the ring, even Mike Tyson moved his feet so fast that he bamboozled most of his opponents, we don't see that anymore as the average weight of the heavyweight division has risen above 250lbs. Usyk will bring that classy movement back to the big boy's division, even if it is in a more conventional European style.

Oleksandr Usyk after he stopped Marco Huck in 10 rounds in 2017.

So who is Tyrone Spong? I hear you ask. With around 100 kickboxing and MMA bouts behind him in a 13-year career, Spong is well known and highly decorated in those sports. He turned to professional boxing in 2015 and has had 14 wins with 13 Ko's since. Born in Suriname, Spong has lived in the Netherlands since the age of 5 where he started his love affair with martial arts.

Spong is ranked at #4 with the WBO and with Usyk's automatic #1 ranking due to being the WBO's Cruiserweight champion moving up a division, this is to all intents and purposes an eliminator for a shot at world champion Andy Ruiz Jr.

Once again we have to ask how a fighter with no top-flight experience can gain a high ranking, even though, we have seen Tom Schwarz get to #2 in these same rankings.

Spong's last opponent Jeyson Minda had fought once as a heavyweight before he met him last month, he was fighting at middleweight against Magomed Madiev in Moscow, Russia in July 2017. Watch Spong vs Minda on Youtube and you will see that Minda is no heavyweight. The fight before Spong faced Minda he won a split decision over Ytalo Perea for the WBC and WBO Latino heavyweight titles. Perea lasted less than a round against Martin Bakole in Liverpool last month and while Bakole is world-class, it was clearly evident that Perea was not.

Spong is trained by respected coach Pedro Diaz and looks the part when he boxes, but of course, looks can be deceiving and when you face a former Olympic gold medallist and undisputed, unified world champion such as Usyk, you will be found out if you are not world-class.

Prediction: Usyk to stop Spong by the 8th round.