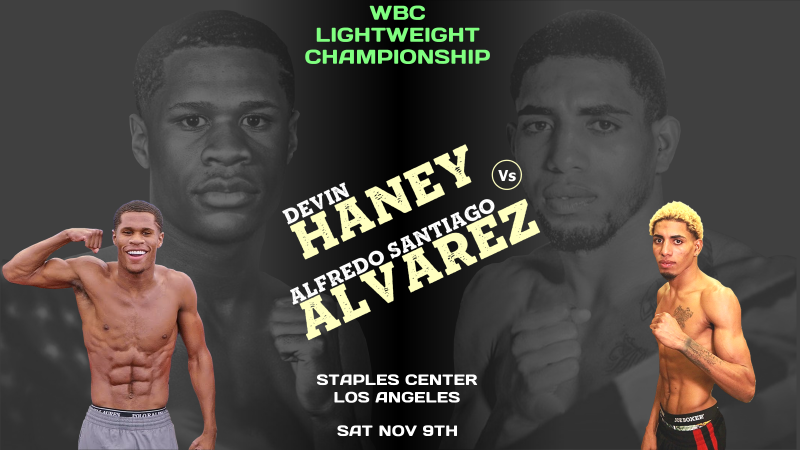 Newly appointed WBC lightweight champion Devin Haney makes the first defence of his new crown at the Staples Center in Los Angeles on the undercard of the KSI vs Logan Paul 2 joint pro-debut event on Saturday, November 9th against Dominican Alfredo Santiago Alvarez. The show will be streamed live in the USA by DAZN and shown live in the UK by Sky Sports.

Haney was elevated to full champion status after Vasiliy Lomachenko was made WBC Franchise champion. With the world governing bodies handing out titles like Jelly-Beans I'm not sure how we are meant to know who rules a division anymore. What I do know is that the WBC world lightweight champion is not the best 135lb fighter in the eyes of the WBC and that's food for thought.

All this is not Haney's fault, he just does the fighting. As a traditionalist, I do not agree with a talented world champion fighting on two debutants undercard, but as Eddie Hearn has gone to great lengths to explain, these are special circumstances that will bring many new fans into the sports, and many millions of dollars into Matchroom Boxings bank account.

Santiago (12-0-0, 4 Ko's) hails from Fajardo, Puerto Rico, but is a Dominican national. Even though he has only had 12 professional bouts he has a couple of decent names on his record. Jayson Velez, the former IBF featherweight title contender lost to the 24-year-old by majority decision back in 2016 and former WBA world featherweight champion Jonathan Victor Barros lost by unanimous decision in 2018.

Santiago's lack of power is a big handicap against a fast, sharp puncher like Haney. Without some firepower to make the 20-year-old title-holder think twice before letting his hands go, it is hard to see how the Dominican can stave of Haney's blistering salvos.

Haney is known to be tight at the 135lb division limit but he is a consummate professional and will no doubt come to the ring in perfect condition. He is very big for the weight and Santiago's biggest wins have come against featherweights, so there will likely be a discrepancy in size.

This is a mismatch but first defences sometimes are. Matchroom should have found a more seasoned challenger for their very talented client.

Prediction: Haney to win by knockout inside 3 rounds.