With just one outing since his May 2017 unanimous decision loss to fellow Mexican icon Saul Alvarez, 33-year-old Julio Cesar Chavez Jr (51-3-1, 33 Ko's) takes on Daniel Jacobs in a bid to put himself back into world title contention. The pair meet on Friday 20th December at the Talking Stick Resort Arena in Phoenix, Arizona. The fight will be shown live on DAZN in America and by Sky Sports in the United Kingdom.

Chavez Jr has been a professional for over 16 years now and you have to go back to June 2011 to find his WBC world middleweight coronation bout when he squeaked past then-unbeaten German Sebastian Zbik (30-0-0) at the Staples Center in LA by majority decision. Title defences against Peter Manfredo, Marco Antonio Rubio, and Andy Lee were the highlight of his career but when he met future Hall-of-Famer Sergio Martinez in September 2012 he lost his crown by unanimous decision.

Danny Jacobs loses by unanimous decision to Saul Alvarez in his last fight.

Seven fights since that defeat to Martinez 7 years ago have led many to wonder if the son of Mexican legend JC Snr even cares for the sport any longer. In those 7 bouts are losses to Andrzej Fonfara and Alvarez, so JC Jr is 5-2 in his last 7 bouts.

Daniel Jacobs is the epitome of professionalism, he always comes into his fights 100% prepared and no matter if its Canelo Alvarez, Serhiy Derevianchenko, or Gennady Golovkin, he gives a good account of himself.

Jacobs (35-3-0, 29 Ko's) is coming off the loss to Canelo which I thought was one of the best performances of the Mexican's career. Not for any single part of his game but for his overall boxing IQ which he used in such a way as to take away the physical advantages that the Brooklyn native held at 160lbs. 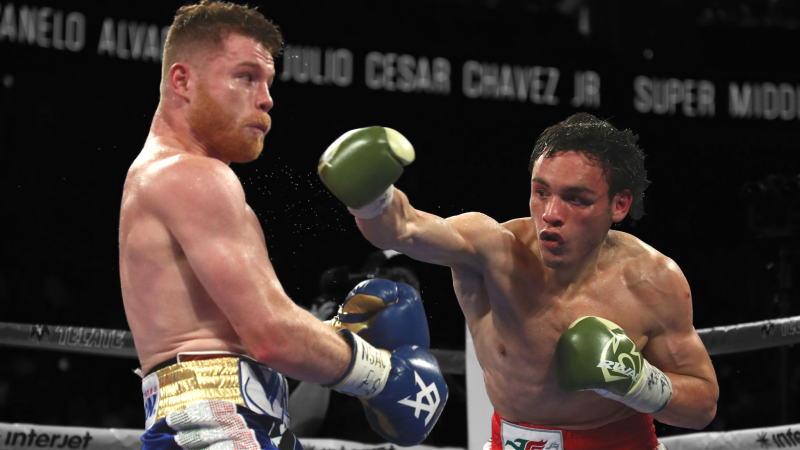 Canelo wins a wide points decision over Chavez Jr in May 2017.

Chavez Jr will find that his inactivity will hurt him against Jacobs who has held two versions of the world middleweight titles (WBA and IBF) just as it did against Canelo. JC Jr's 1st round blowout of unheralded Columbian Evert Bravo (25-10-1) in August will have done little to shake off the ring-rust that he has accumulated since the Alvarez fight.

Chavez Jr was a very formidable middleweight at the height of his career but I'm not convinced he would ever have beaten the always in-form Jacobs, so it's hard to see at this stage how he can do so. Chavez has always had a good chin and this is why I expect the fight to be competitive at times. Coming back down to super-middleweight or thereabout will take its toll on the large frame of the 6f  tall Mexican so whether he will retain his strength over the 12 rounds remains to be seen.