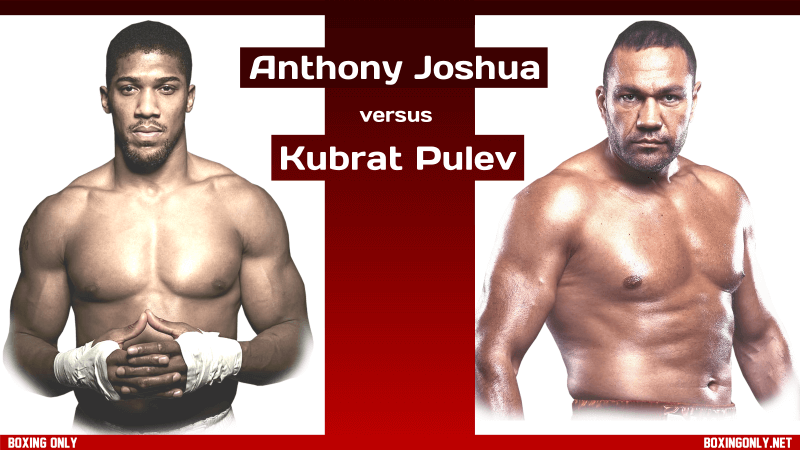 WBA Super, WBO, IBO, and IBF world heavyweight champion Anthony Joshua makes the first defence of the titles he won in a rematch against Andy Ruiz Jr last time out in Diriyah, Saudi Arabia when he meets former world title challenger Kubrat Pulev of Bulgaria at The O2 Arena on Saturday 12th December live on Sky Sports Box Office in the UK and on DAZN in other territories. Of course, the champion also amassed seven world title wins before he was unceremoniously dumped to the canvas four times in on his way to defeat in his June 1st 2019 match at Madison Square Garden with Ruiz Jr.

In any line of business, it is always good to be in demand but AJ seems to carry a bigger bullseye on his back than any other active heavyweight. With a two-fight deal signed to fight Tyson in 2021, the Watford man cannot afford any slip-ups.

WBO No1 contender Oleksandr Usyk intends to either force a mandatory shot at Joshua’s belt or see AJ stripped so that he can face recent Daniel Dubois conqueror Joe Joyce for the vacant title. This leaves Joshua’s management team with a tough decision to make. Can they fit in Usyk before facing Fury or do they give the belt up and face Fury in a fight that could not be called “Undisputed?”

Joshua is close to the career defining fight he has always craved for against fellow Brit Tyson Fury,

Joshua vs Usyk looked a dangerous assignment before Usyk’s two heavyweight matches against Chazz Witherspoon and Derek Chisora which left most wondering how the former undisputed Cruiserweight world champion could possibly take the titles off the version of Joshua that thrashed Ruiz Jr in a one-sided display of pure boxing.
It would be a real show of confidence on AJ’s part if he were to face the Ukrainian before tackling the giant Fury in a massive heavyweight showdown.

But, before Joshua and his team have to deal with any of those obstacles, the champion has to get past the 39-year-old Bulgarian Pulev. The challenger is into his 11th year as a professional so his 28-1-0 record shows a distinct lack of activity. The resident of Sofia, Bulgaria fought 17 times in the first 3-years of his career which means he has only fought 12 times in the last 8 years. In comparison, Joshua turned pro in 2013 and has already amassed a 24 fight resume (23-1-0).

Pulev challenged long-reigning heavyweight champion Wladimir Klitschko in November 2014 and was knocked out in the 5th round. This was considered one of Klitschko’s better defences due to the spectacular nature of the finish and Pulev’s amateur background.

Joshua stood up to Klitschko's best punches unlike Pulev in his 2014 challenge to then champion Wladimir.

The best wins on the Bulgarian’s record came long ago against Alexander Dimitrenko (Ko 11) who was then 32-1-0 in a vacant European title bout, and the then unbeaten Russian Alexander Ustinov (Ko 11) in Pulev’s first defence. His next fight resulted in a unanimous points win over Tony Thompson, the former world title challenger. Since the Klitschko thrashing, Pulev’s best wins have been over Derek Chisora (Split decision) for the vacant EBU belt, and Hughie Fury (Unanimous decision).

I’ve enjoyed all of Joshua’s title-winning (and losing) efforts along the way and I hope I enjoy this one too. But, it won’t be because I think the 6ft 4 Inch Bulgarian has a realistic chance of winning. I can see AJ out boxing, outpunching, and knocking out the visitor in the first 4 rounds, such is the gulf in their abilities at this stage of their careers.

Prediction: Joshua to score a knockout inside 4 rounds.